By Partner for SurgeryDecember 27, 2016Stories 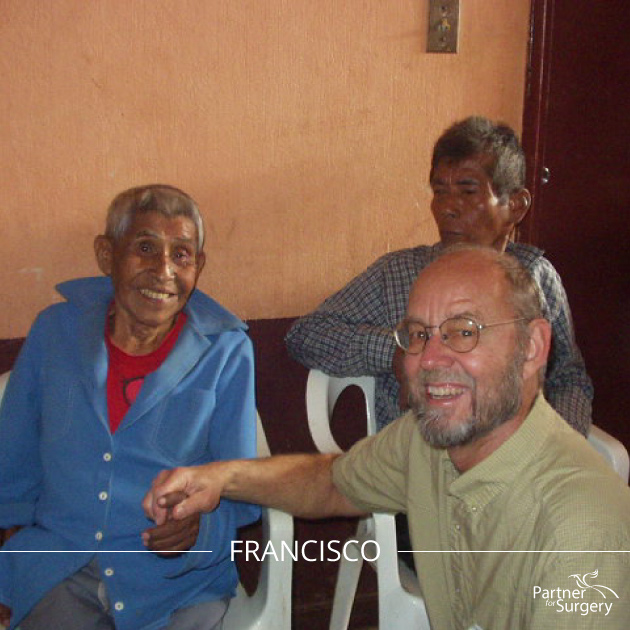 Francisco had been blind for 20 years. He was guided by his 6 year old grandson when he ventured out of the house where he lived with his son. He could not tend his fields in his state and spent most of his time in the house. One day there was a festival in his village and everyone in his house had gone to be a part of it. He heard the music and the laughter and decided to go but his grandson had also gone and so he set out to find it alone. He could not see and staggered about, finally falling into a tree and lying on the ground, weeping. Finally a neighbor found him and led him home.

A short while later, early in its existence, Partner for Surgery came to Francisco’s village with a small surgical team to do cataract surgery. Francisco’s family had heard about the clinic and his grandson led him to the surgical site. He was told that he had a condition known as cataracts and asked if he would like to have an operation to have his sight restored right then and there. He said yes, that he would like to be able to once again tend his cardamom. He had a surgery that took all of fifteen minutes and the next day, when the bandages came off and Francisco could see, everyone, including the doctors, the Partner for Surgery staff, and Francisco cried. After twenty years of blindness – he could see. Such a simple procedure but one that was not available to Francisco until Partner for Surgery came to his village.

Our experience with Francisco provided the model for how Partner for Surgery would function – train village members as Health Promoters to be our representatives who publicize our clinics in the rural areas, escort patients to the hospital sites and provide translation between Spanish and the local Mayan language.