Fuego Aftermath: They have lost everything

By Partner for SurgeryJune 21, 2018Stories 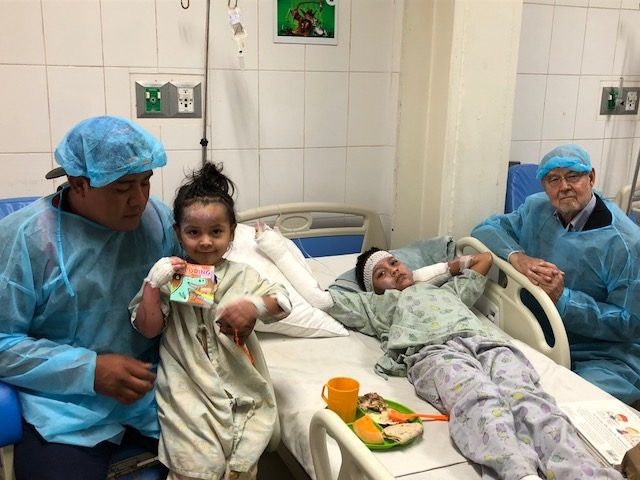 Founders Frank and Linda Peterson were in Guatemala for the Fuego Volcano aftermath and bring you the story of one family whose children are currently being treated by Dr. Lourdes Santizo at the Children’s Burn Clinic, Roosevelt Hospital in Guatemala City, Guatemala.

On the Sunday of the eruption, Herman was working loading crates at a port 40 kilometers away.  His wife and daughters were spending a typical Sunday afternoon at the home of Herman’s sister.  Suddenly there was a rumble and a commotion and they stepped outside.  They saw a very large dark cloud bearing down on them.  Herman’s sister’s family ran back inside the house but Herman’s family decided to run.  The Mom grabbed the youngest and ran but Tatiana realized her sister Cristy was not with her and went back inside the house that was very dark by this time.  She could feel her skin burning.  She found Cristy by touch and ran out of the house with her.  All seven members of the family who stayed in the house perished.

Tatiana ran with Cristy ahead of her Mom, who was still carrying Dayana.  Everything was very, very dark because of the smoke and ash but suddenly Tatiana saw a light and led the family to it.   The light was the headlights of a car loaded with people and there was no room for them.  Then there was a crowded second car and people made room for them. Tatiana was the hero of the family.  Her father said: “Tatiana is always next to me…..interested in my work and helping me.  That helped her to be tough and she is tough and was able to get her sister out and save her life.”

All three of the girls have burns but will survive. Tatiana will have scars on her face.  Their house is gone and most of their village, including the school, is destroyed.  Herman has lost his job because he has not been able to report for work. The mother was in surgery as we were visiting with burns on her legs.  They have lost everything.

During our visit, Partner for Surgery presented Dr. Lourdes Santizo with a check for $5,000 to help with post operative recovery.  We thank our partner Guatemalan organization, ACPC for helping to facilitate the visit.  And we thank those of you who have contributed to this donation.