Fuego destroyed their home; your donation helped bring back happiness

By Partner for SurgeryOctober 11, 2018Stories 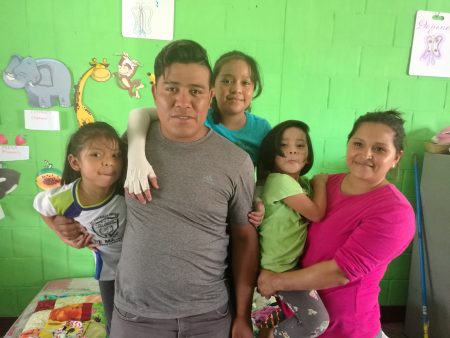 We last met Hernan and his family soon after the Fuego volcano disaster when they were recovering from the trauma, and his three daughters were being treated for burns received during the eruption. One of the girls, Tatiana, will have scars on her face. With the help of your donation, the girls were seen by Dr. Lourdes Santizo at the Children’s Burn Clinic at Roosevelt Hospital in Guatemala City, Guatemala

But life post-Fuego is drastically different. They’ve abandoned their home, as due to the lava and debris, the Guatemalan government deemed it unfit to live in. The shelters established for Fuego victims were overpopulated and unable to accommodate Herman and his family,.
Eventually they were able to find a new home and have begun to rebuild their lives.

Still, Hernan’s three daughters are recovering well and continue to see Dr. Santizo for their follow-up appointments.
Their therapy will continue for the foreseeable future.

“My girls were affected in many ways due to the volcano; they cry or have nightmares,”Hernan said. “It is normal since they experienced something so traumatic.”

Thanks to your support, Partner for Surgery and ACPC have been able to provide Hernan’s daughters with physical therapy and the support of a psychologist.

Hernan says he can’t thank enough those who donated.

“You have brought happiness into this home. We could not have done it without your support.”