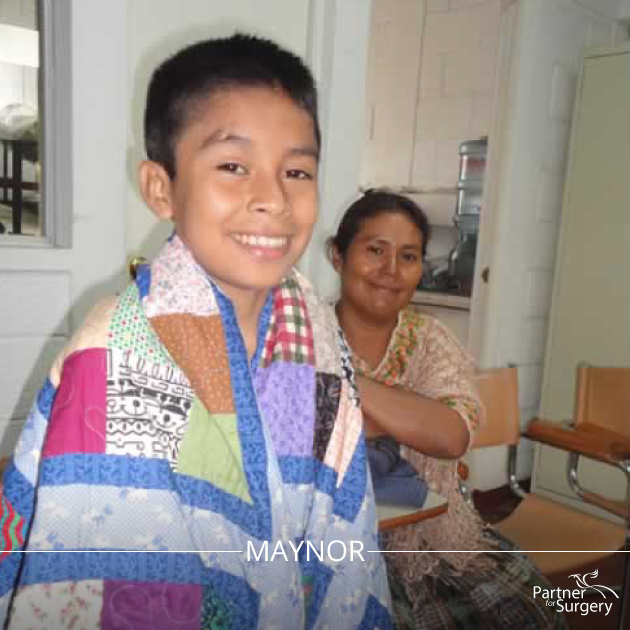 By Partner for SurgeryDecember 30, 2016Stories
No Comments

Maynor was twelve when he came to us in 2013, one of four children in his family. Six years ago Maynor’s father, a teacher, died suddenly, leaving the family heartbroken and in extreme poverty. Maynor’s mother had been a housewife but then had to look for work to support her family. She began to clean the home of a wealthy woman and Maynor would often go along and help. His mother said that he is the type of child a mother can always count on.

One day, Maynor was helping his mother do laundry. They were up on the terrace, hanging clothes on the line to dry. The house was protected by electrical wire and, when Maynor threw a shirt over the line by mistake, 13,000 electrical volts went through his entire body. When he woke up, his mother was crying because she thought he was dead. He also began to cry. The woman of the house, instead of offering to help, fired Maynor’s mother and gave them the equivalent of $26 to fend for themselves.

Maynor’s mother was desperate. They rushed to a local hospital and his life was saved. However, there was no opportunity for burn repair surgery and Maynor went home with terrible burns.

After a few months, Maynor’s mother heard a radio announcement about a Partner for Surgery Mobile Medical Mission. Maynor and his mother made the journey and were given a surgical slot with our May team specializing in burns.

In July 2013, Maynor had a second surgery through Partner for Surgery, a surgical team with Faces of Hope and local physicians, Drs. Santiso and Fuenmayor. Both operations slowly released the flesh that melted together, contorting his body. The July surgical team released the fused skin behind his knees, allowing Maynor to straighten his legs again.

The operations took place at Partner for Surgery’s surgical facility in San Juan Sacatepéquez, Centro de Salud Bárbara. The Albergue San Gabriel, adjacent to the clinic, provided temporary housing through our local Guatemalan partner, Compañero en Salud. The surgeries were just the beginning, however, as burns require extremely intensive post-operative care. The lives of Maynor and other burn patients continued their transformation at Dr. Santiso’s burn clinic in Guatemala City with Partner for Surgery‘s support. Maynor and other burn patients were able to receive ongoing support and after-care. Throughout the weeks at the burn clinic, Maynor always had a smile for everyone and was more concerned about the well being of the other children than himself.

Maynor continues to fight for a better life and not let the accident break him down. He hopes to follow in his father’s footsteps and become a teacher. He said, “I think about my father a lot and miss him. I want to make my father proud.”